You missed the symposium?

You missed the symposium? The texts and the powerpoints of the presentations are online here.

Eventually, it will also be possible to watch the videos online. The french ones are already partially available here.

Of course, the experience of the amazing concert by Angeli Primitivi (José Lepiez and Patricia Châtelain), and all the opportunities of exchange which largely enhanced the programme will remain out of the scope of what can be shared online.

A valued symposium bringing 4 continents together 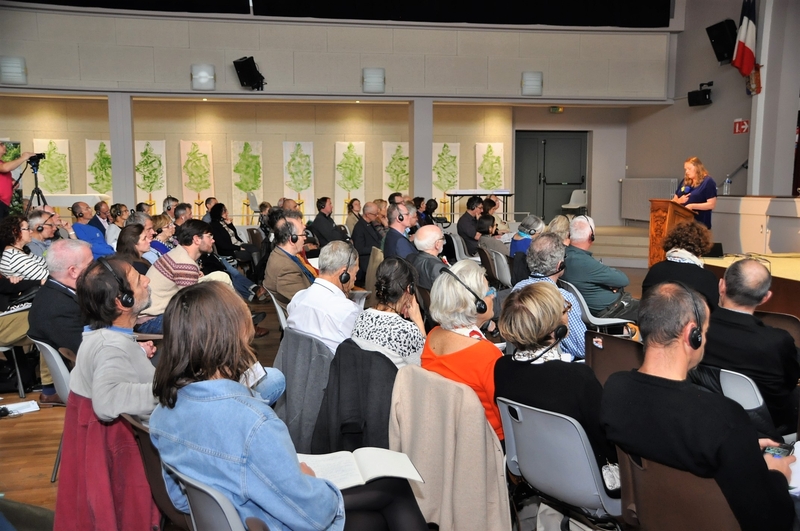 The international symposium « Tree avenues – from war to peace » is finished. 110 participants from 4 continents had gathered in Liffol-le-Grand (Vosges county, France). The programme was packed, as 31 speakers from 10 countries took the floor during these two days following the centenary of the Armistice. But the symposium proceeded fluidly, as it mixed presentations, feedback, a prize giving ceremony and a round table /workshop, not to mention breaks, visits, films and a concert by Angeli Primitivi.

The event was heartily appreciated for the richness of its contents as well as for the quality of the exchanges and the well-thought-out organization : “Local, national, and international focus and context, with lots of food for thought.” “I learnt an enormous amount from the presentations and over coffee and our meals together. “ “interesting and moving” ”Huge thanks to you and all the team for excellent organisation, hospitality and a most enjoyable and interesting, I hope too successful symposium.”

Registration for the 2018 symposium is now open

The registration for the symposium on November 12-13th is now open. The programme is online here or can be downloaded here. It has been awarded the European Year of Cultural Heritage label.

Speakers will talk about trees,  e.g. Glenn Williams, director of TREENET (Tree and Roadway Experimental and Educational Network), Adelaide (Australia). They have just closed their 19th annual conference. Speakers will talk about  avenues, of course: avenues from around the world, present and past avenues. Katharina Dujesiefken is « tree and tree avenues protection » coordinator at BUND (Friends of the Earth Germany). AT the beginning of November, she  will organize her 14th annual meeting in Mecklemburg-Western Pomerania, with an opening by Christian Pegel, minister of Energy, infrastructure and digital economy of the Land. Avenues will also be in the focus of the awards ceremony for the French « Avenue Prize » (which was copied by Italy).

Erick Constensou, Head of the Road environment and technical service at the Haute-Garonne county council, winner of the 2016  «Avenue Prize », and Laurent Pierron, chair of Société Française d’Arboriculture, an ISA Associate organization, will tackle issues of road  and tree management.

From war to peace

Taking place the day after the Centenary of the Armistice, the symposium will deal with World War I. Paul Gough, professor at RMIT University, Melbourne, has published numerous papers and books about  war artists, and he has studied particularly how tree avenues were perceived by soldiers. He himself is a painter, represented in the permanent collection of the Imperial War Museum in London, the Canadian War Museum in Ottawa and the National War Memorial in New-Zealand.

The issue of  remembrance will be dealt with by Jo-anne Morgan, Canterbury university (New-Zealand). She has produced a PhD thesis which is cited in all subsequent work about memorial avenues. Marie-Madeleine Damien, general secretary of Paysages et Sites de mémoire de la Grande Guerre, will also contribue to the topic. Her aim is that the memorial sites and the landscapes of WWI be taken up in the World Heritage list

The landscape and democracy will also be considered, with speakers like Maguelonne Déjeant-Pons, Executive secretary of the European landscape convention, Council of Europe, or Chris Rust, co-chair of STAG – Sheffield Tree Action Groups

Together with Katharina Dujesiefken, Piotr Tyszko-Chmielowiec, director of the « Roads for Nature » programme of the Polish Foundation for Sustainable Development, will show us how tree avenues can contribute to European cohesion.

Passing from war to peace :  why not proceed on tree lined roads to get to know other places and other people ? Cultural tourism  is the key. Erwin Pfeiffer, Deputy head of Tourism at ADAC, Germany’s No. 1 among the automobile clubs, ranking second worldwide, participates in many important tourism organisations, and chairs a Porsche Club in Munich. He is in a good position to present the longest touristic route comprising tree avenues, the 2900 km long Deutsche Alleenstraße in Germany.

25 speakers on the whole, from 11 countries and 3 continents will nurture knowledge, reflection and projects for tomorrow.

Some pleasant comments about the programme of the symposium

By overcoming the boundaries of time and space, tree avenues incarnate amazingly powerful symbolic links: they can keep memories alive for generations; they can connect people and places; and they can demonstrate human solidarity, e.g. the cross-border avenue between Germany and Poland planted in 2014.

That is precisely what, one hundred years and a day after the 1918 Armistice, the international conference to be held in the repeatedly battle-torn Vosges region of France will show.